is a lightweight, open-source, distributed relational database written in Go, with SQLite as its storage engine. 5.10.0 is now out, capping a series of releases that brings significant improvements in disk usage and startup times.

Since the release of 5.6.0 there are have been a number of distinct improvements, all aimed at reducing the amount of data written to disk. Why focus on disk usage? First because it’s long been obvious that disk IO is the performance bottleneck for rqlite, due to fsync’ing to the Raft log. Secondly, rqlite aims to be a lightweight database, so keeping its disk footprint low is desirable. 5.10.0 now contains the following changes:

While it’s fairly easy to predict the impact the changes above will have, it’s always important to confirm the results. So I ran a simple, 6-hour load test against a single rqlite node, which used an in-memory SQLite database. The load test involved inserting a simple record into a table, over and over again. I used rqbench to perform the writes:

I used InfluxDB, Grafana, and Telegraf (specifically the http plugin) to collect (via the rqlite diagnostics endpoint) and display the results.

Let’s take a look at 5.6.0 performance first (technically a patched version of 5.6.0 so the required metrics were collected). 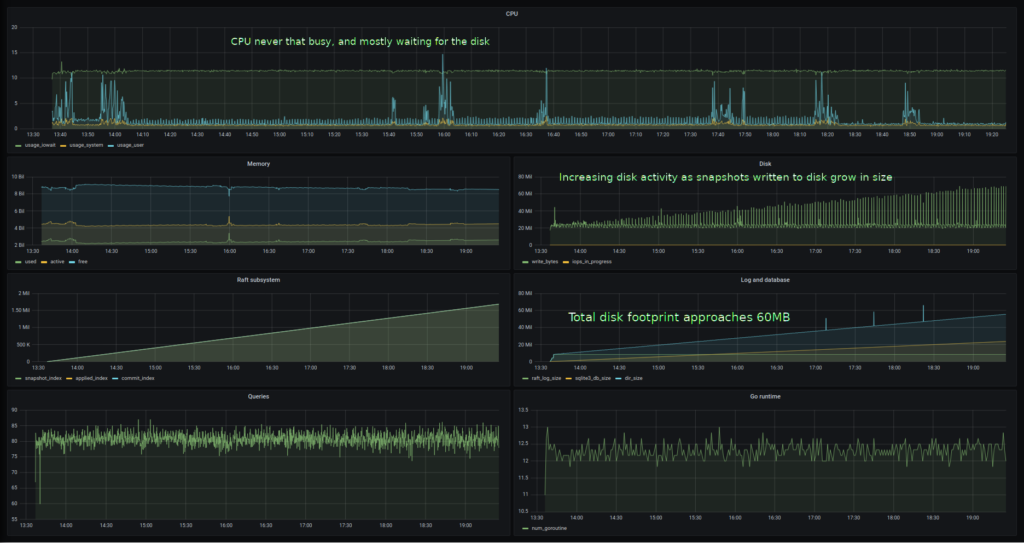 Nothing too out of the ordinary. The CPU is never that busy and mostly waiting for IO. The amount of data being written to disk — and rate it is being written — steadily increases however, as the SQLite snapshots grow in size. The Raft subsystem operated normally — committing log entries, and performing a snapshot every couple of minutes or so. 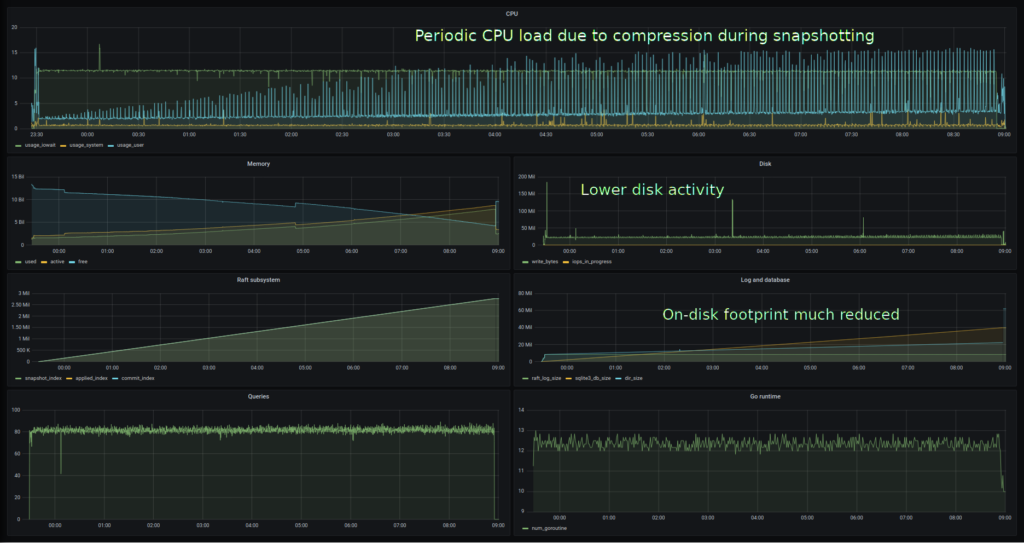 This time disk activity is significantly down, but the trade-off is more CPU activity during the snapshot-compression cycles. This is exactly the trade-off I wanted to make, but it’s good to see that it is actually happening. Note that the disk footprint is much smaller too — it’s only 30% as large for (roughly) the same amount of SQL insertions.

It’s also good to see that write performance remained steady throughout each test. This wasn’t something I had explicitly tested before, and didn’t receive reports of any issues, but again, it’s good to see.

5.10.0 adds some other small features, as well as some more diagnostics. I also expanded the test suite, as code quality is very important to me. So download it and check it out.