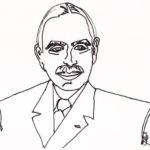 I always use the names of economists for my machines’ hostnames. keynes, friedman, marx, fisher, ricardo.

So every so often the strange economics of open-source software hits me.

Today it is almost taken for granted that the source code for most software is freely available. This is a profound and remarkable change, given how different it was only 15 years ago. From a certain point of view our industry is “giving away” its product, and yet the industry is richer and more powerful than ever.  So where is the value? What are the implications?

Where has all the closed-source software gone?

Of course, it’s not gone. It’s there at the banks, within embedded devices, and companies such as Microsoft and Oracle remain among the most powerful companies in the world, but almost all the innovation — and most importantly most of the excitement —  is happening within open-source.

Within our industry it is becoming apparent that services — SaaS  and companies such as Airbnb — are the future.  And in fact, it sometimes seems to be that the only way to write really valuable closed-source software nowadays is within the context of a service. Behind all the REST endpoints, the  AWS ELBs, and the HAProxy systems, sits some of most closely-guarded software in the world.

The ever-increasing dominance of open-source

The increasing dominance of open-source software seems particularly true with respect to infrastructure software.  While security software has often been open-source through necessity — no-one would trust it otherwise — infrastructure is becoming the dominant category of open-source. Look at databases — MySQL, MongoDB, RethinkDB, CouchDB, InfluxDB (of which I am part of the development team), or cockroachdb. Is there anyone today that would even consider developing a new closed-source database? Or take search technology — elasticsearch, Solr, and bleve — all open-source. And Linux is so obvious, it is almost pointless to mention it.
If you want to create a closed-source infrastructure solution, you better have an enormously compelling story, or be delivering it as part of a bigger package such as a software appliance.

So where is the value?

Compared to when I first started programming, that some of the most valuable companies in software now give away their product is astounding, when you actually think about it. So where is the real value within a such a company, when its product is free? It’s where it’s always been — just more so.

The real value is within the development team and its ideas, that the team behind the software are, and remain, innovative, execute well, and produce quality software. And that they remain so is key — so that it does not matter that what they produce is freely available.  It is of little benefit to a competitor that the source is freely available, when the team behind the project is probably six months ahead — and often more — conceptually in terms of design, development and process.

The economics of recruitment

And the implications go far beyond how software is developed.
It is generally accepted these days within The Valley that large, older, firms find it particularly hard to hire. The excitement, and latitude for creativity, within a start-up has always appealed, and even more so now with the outstanding commercial success of some.

But a second-order effect is also prevalent — many developers baulk at the idea that their work may never be seen by their peers in the open-source community, and therefore may never help them progress in their careers. And it is at larger, older firms, that the least amount of open-source software is written — what Paul Graham calls downwind jobs.

But Services remain part of the future — because while the code that Service software developers write may not be visible, the functionality is visible to the world and with the advent of cloud-computing, the power accruing to these developers is significant and growing. Services can hire, unlike the traditional firms.

Possibilities for our grandchildren

The rise of open-source has been a remarkable development in the history of economics and production. I often wonder what Keynes, Marx, and even Ricardo, would think of it all.

5 thoughts on “The strange economics of open-source software”